Student file of Louis Brown, a member of the Sioux Nation, who entered the school on October 29, 1911 and ultimately departed on April 6, 1914. The student did not attend the school continuously, but left and reentered. The file contains student information cards, an application for enrollment, an outing record, trade/position record cards, and correspondence. The file indicates Brown was a clerk at the Sac & Fox Sanatorium in Iowa in 1914.

Note: The student is known as both Louis and Lewis in school documents. 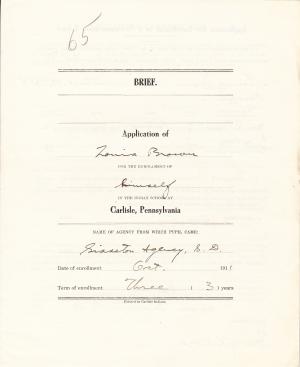