Student file of Leslier Sundown, a member of the Seneca Nation, who entered the school on October 15, 1915. No departure date is given. The file contains student information cards, an application for enrollment, an outing evaluation, letters, an outing record, certificates of promotion, and discussions of financial transactions. The file indicates that Sundown decided not to return to school after an outing in the summer of 1918, but instead to continue working at his outing location, a shipyard on Hog Island. 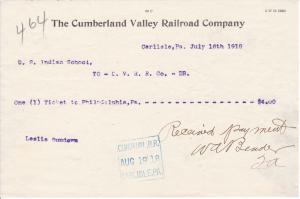