Student file of Lawrence Obern, a member of the Chippewa Nation, who entered the school on October 1, 1915 and departed on December 11, 1916. The file contains student information cards, an application for enrollment, medical/physical records, financial transactions, a vacation request form, and correspondence indicating that Obern returned to his home in Wisconsin after leaving Carlisle.

Note: In this file the student is identified as both Lawrence Obern and Lawrence O'Bern.

Note: Some of Lawrence Obern's documents were originally found in the folder of another student; Mollie Mantel, NARA_RG 75_Series 1327_box 18_folder 863.

Note: Some of Lawrence Obern's documents were originally found in the folder of another student; William Lawrence, NARA_RG 75_Series 1327_box 112_folder 4652. 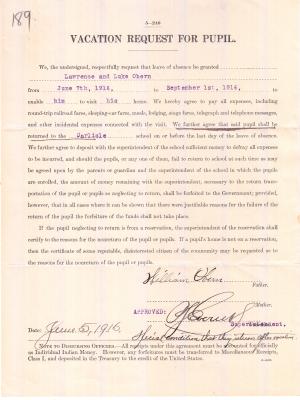