Student file of John H. Miller, a member of the Chippewa Nation, who entered the school on September 19, 1894, graduated in 1902, and ultimately departed on February 12, 1902. The student did not attend the school continuously, but left and reentered. The file contains student information cards, returned student surveys, a former student response postcard, a report after leaving, and letters/correspondence. The file indicates that Miller was a farmer in Rapid City, Michigan in 1907, a harness maker for the Antrim Hardware Company in Elk Rapids, Michigan from 1908 to 1911, and was a private attached to the Gunpowder Reserve Detachment B in Edgewood, Maryland in 1918.

Note: These documents were found filed at the U.S. National Archives in the same folder as documents related to John M. Miller. 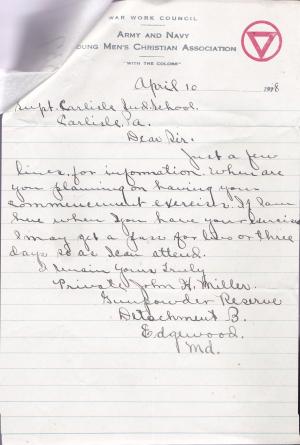