Student file of John Dixon (also known as John Dickson), a member of the Pueblo Nation. No entrance or departure dates are given. The file contains letters/correspondence, former student response postcards, and a report after leaving. In letters exchanged with the school John Dixon asks for his son and nephew to be considered for acceptance to the Carlisle Indian School. According to the information provided, John Dixon was a carpenter and farmer in Pena Blanca, New Mexico as of 1913. 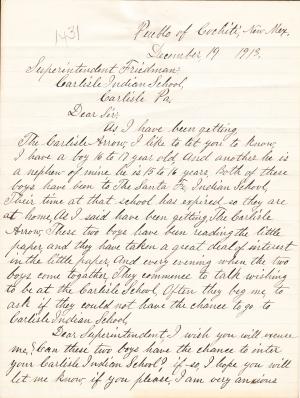