Student file of James W. Mumblehead a member of the Eastern Band of Cherokee, who entered the school on October 7, 1905 , graduated in 1911, and departed on May 17, 1912. The file contains a student information card, news clippings, a progress/conduct card, trade/position record cards, correspondence, an outing record, financial transactions, and returned student surveys. The file indicates that Mumblehead was a band leader in the New Cumberland band, working as a printer during the day and a music teacher in the night in New Cumberland, Pennsylvania in 1912, and working as a printer in Pine Ridge, South Dakota in 1915. 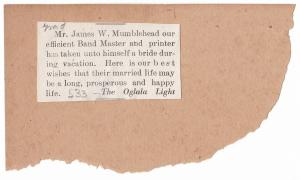