Student file of Jacob Herman, a member of the Sioux Nation, who entered the school on November 2, 1914 and departed on June 8, 1918. The student did not attend the school continuously, but left and reentered. The file contains student information cards, a federal financial aid form, applications for enrollment, certificates of promotion, correspondence, financial transactions, and an outing record. The file includes discussions of Herman's inheritance and the money paid to him by his tribe, and indicates that he spent some time on outing with the American Iron and Steel Company in Lebanon, Pennsylvania in 1916. 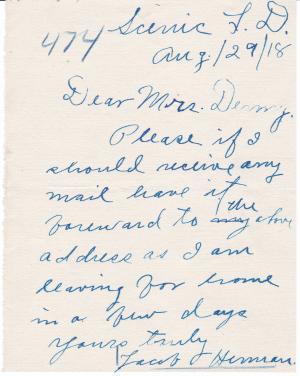