Student file of Ida Johnson, a member of the Wyandotte Nation, who entered the school on October 3, 1891 and departed on January 4, 1893. The file contains a student information card, a returned student survey, and a report after leaving. The file indicates Johnson attended the Fredonia Normal School (State University of New York at Fredonia) in Fredonia, New York in 1892, was a housekeeper in Wyandotte, Oklahoma in 1910, and a teacher in the Indian Service at the Chilocco Indian School in Chilocco, Oklahoma in 1912. 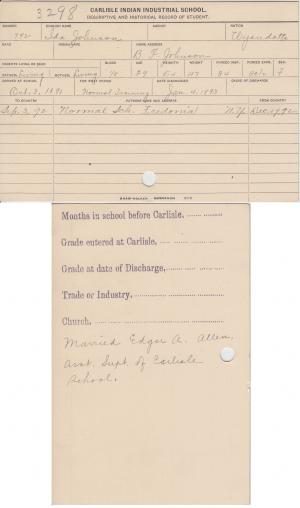