Student file of Hettie McAfee, a member of the Choctaw Nation, who entered the school on September 17, 1914, graduated in 1917, and departed on June 11, 1917. The file contains a student information card, an application for enrollment, financial transactions,  letters/correspondence, an outing record, and certificates of promotion. The file indicates that after graduating McAfee returned home to Idabel, Oklahoma.

Note: In the file the student is referred to with the first names Hattie and Hettie and the surnames McAffee and McAfee. 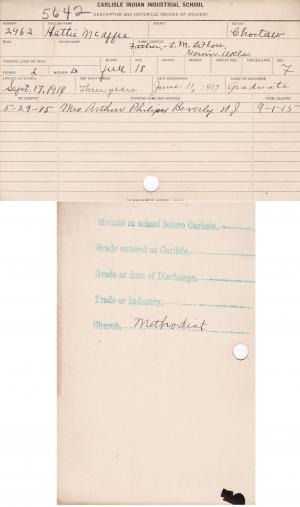