Student file of Guy Jones (Hepan), a member of the Sioux Nation, who entered the school on August 27, 1897, and departed on June 28, 1900. The file contains a student information card, a returned student survey, a news clipping about his appointment as Industrial Teacher at the Wild Rice River Boarding school, and a report after leaving indicating he was working for the Indian Service in Standing Rock, North Dakota, in 1911.

Note: Although the student file does not reflect it, other records indicate Jones was a graduate in the Class of 1900. 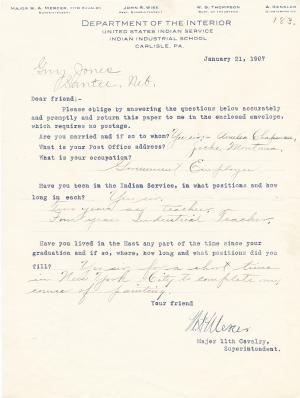