Student file of Grace Bigheart. No entrance or departure dates are given, and no Nation is given. The file contains letters and correspondence, and a report after leaving indicating she was living in Pawhuska, Oklahoma in 1910.

Note: Other documentation indicates Bigheart was a member of the Osage nation who entered the school on June 9, 1882 and departed on August 17, 1885.

Note: Grace Bigheart was the mother of student John Bigheart. 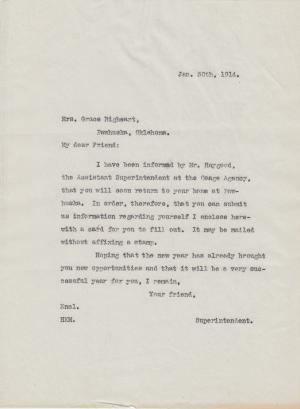