Student file of Fred Doxtater, a member of the Oneida Nation, who entered the school on September 8, 1900 and departed on June 2, 1906. The file contains a student information card, a returned student survey, a former student response postcard, and a report after leaving. The file indicates Doxtater was working as a long line teamster in Santa Ana, California in 1910 and a farmer and rancher in Santa Ana, California in 1913.

Note: These documents were found filed at the U.S. National Archives in the same folder as documents related to Frederick Doxtater. 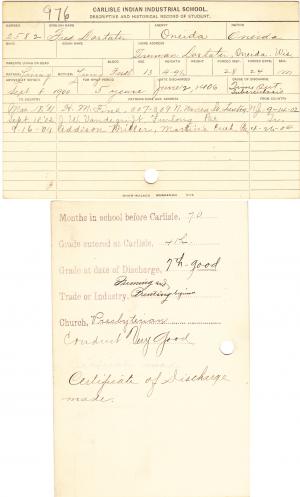