Student file of Eva Patterson, a member of the Seneca Nation, who entered the school on September 22, 1911 and departed on June 21, 1916. A note in the file says she re-enrolled on September 20, 1916, but no final departure date is given. The file contains student information cards, applications for enrollment, an outing record, medical/physical records, financial transactions, certificates of promotion, a progress/conduct card, a federal financial aid form, and correspondence including correspondence regarding an accident during an outing. The file indicates Patterson was attending Lincoln University in West Chester, Pennsylvania in 1915 and 1916.

Note: Some of Eva Patterson's documents were originally found in the folder of another student; Clifford Halftown, NARA_RG 75_Series 1327_box 128_folder 5083. 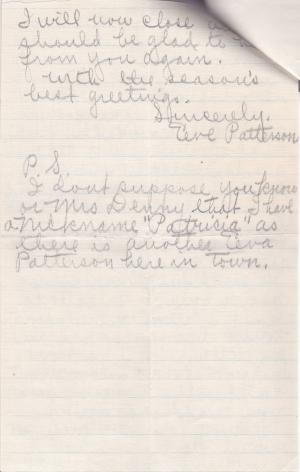