Student file of Esther A. Cooke, a member of the Onondaga Nation, who entered the school on April 19, 1912, and departed on October 2, 1913. The file contains student information cards, a application for enrollment, a news clipping announcing her marriage, and a report after leaving indicating she was married and living in Syracuse, New York. The file contains correspondence between Esther's grandmother Mrs. E. A. Pierce and the school regarding Esther's health and enrollment.

Note: In this file the student's last name appears both as Cooke and Cook. 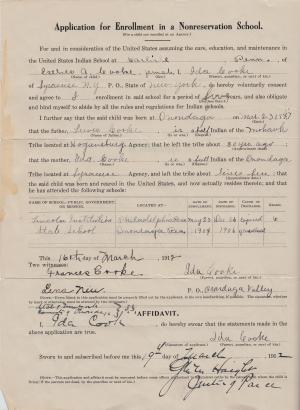