Student file of Donald McIntosh, a member of the Apache Nation, who entered the school on November 14, 1892, graduated in 1901, and ultimately departed on March 20, 1901. The student did not attend the school continuously, but left and reentered. The file contains student information cards, a returned student survey, a trade/position record card, and a report after leaving. The file indicates McIntosh was a railroad foreman in San Carlos, Arizona in 1907 and living in San Carlos, Arizona in 1909. 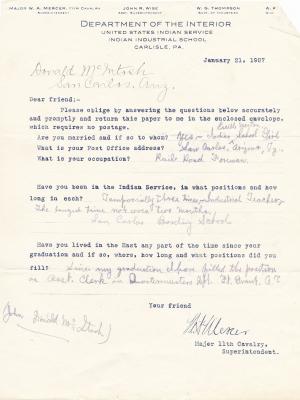