Student file of Charlotte Wilson, a member of the Pottawatomi Nation, who entered the school on November 2, 1888 and departed on June 27, 1894. The files contain a student information card and a former student response postcard.

Note: In this file, a postcard returned to the school in 1913 incorrectly lists Charlotte as having died in 1881, 1882, or shortly after finishing her time at Carlisle. However, a direct descendant has indicated that Charlotte married William P. Hampton in 1910, had two children, and then died in 1948. She is buried in Hickory Grove Cemetery in Grove, OK. 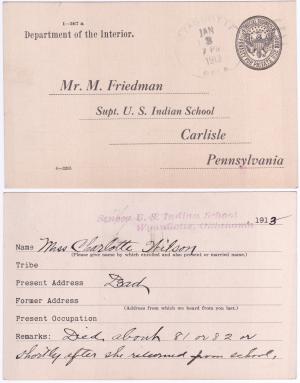