Student file of Charles Locklear, a member of the Lumbee Nation, who entered the school on March 25, 1910 and departed on October 17, 1910. The file contains a student information card, a medical/physical record, a progress/conduct card, an application for enrollment, and a former student response postcard that indicates Locklear was working as a farmer in Lumberton, North Carolina in 1913. 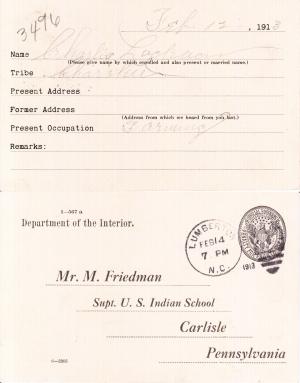