Student file of Charles Fish (Longfish), member of the Sioux nation, who entered the school on January 7, 1905 and ultimately graduated in 1911, departing on June 6, 1911. The student did not attend the school continuously, but left and reentered. The file includes student information cards, an application for enrollment, correspondence, a returned student survey, a report after leaving, a progress/conduct card, an outing record, a trade/position record card, and news clippings. The file indicates that Fisher painted for the government.

Note: This student's name appears to have originally been Charles Longfish (as on his application), but at the school they seem to have called him Charles Fish or Charles L. Fish. He is also known as Charles Fisher, Charles Fisch, Charly Long Fish, and Charley Longfish. 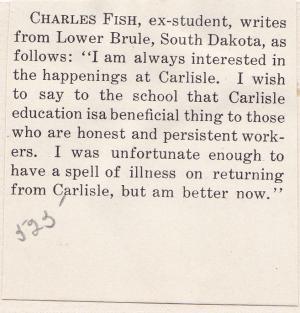