Student file of Bemus Pierce, a member of the Seneca Nation, who entered the school on November 3, 1890, and departed on August 15, 1895. The file contains a student information card, trade/position record card, correspondence in which Pierce argues against "the movement... to exclude the New York Indians from the Carlisle Indian School," news clippings, and a report after leaving that indicates Pierce was a farmer in Irving, New York in 1910. This student file also includes a letter from Richard Henry Pratt to Superintendent Oscar H. Lipps in which Pratt recommended that Pierce be "Mr. Warner successor" as football coach at the school. 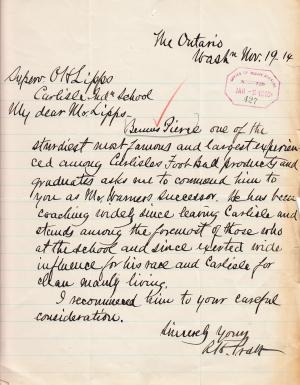