Although the only document in this file is marked for Robert Anderson, the mention of being a rancher as of 1910 does not match with the information for the only student named Robert Anderson who attended Carlisle, and who was still enrolled at the school in 1910. It is likely that this card was actually for Albert Anderson, a member of the Crow Nation, who entered the school on November 17, 1883 and departed on August 20, 1890. It was reported in issues of the Red Man magazine in 1911 and 1912 that Albert Anderson and Sits Down Spotted were both ranchers, and photos from their ranches were included. 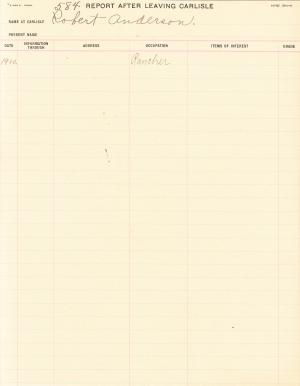