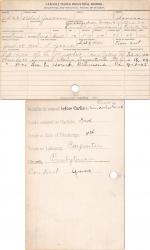 Student information card of Albert Jackson, a member of the Seneca Nation, who entered the school on June 29, 1900 and departed on September 6, 1905.

Note: Jackson subsequently returned to the school on October 14, 1905 and died there on December 7, 1906. He was buried in the cemetery on the school grounds.