Student file of Arthur Lieb, a member of the Omaha Nation, who entered the school on September 17, 1908 and departed on November 30, 1908. The file contains an application for enrollment, a student information card, a progress/conduct card, a returned student survey, a former student response postcard, and a report after leaving. The survey indicates Arthur was farming in Pender, Nebraska shortly before entering automobile school in July 1911. The former student response postcard shows Arthur become an automobile repairman in 1912 also in Pender, Nebraska and which he continued in 1913. 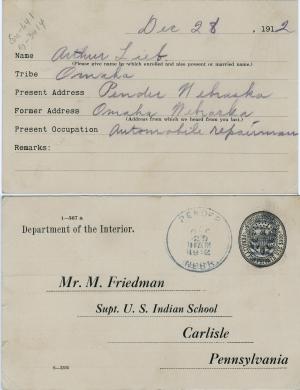