The Carlisle Indian School Digital Resource Center is excited to announce that a new collection of enrollment records are now available online!

The Descriptive Statements of Pupils were created during the 1880s, 1890s, and 1900s to track groups of individuals sent or transferred to the Carlisle Indian School. This form would have typically been filled out by the agent or other government employee working at a particular agency or reservation, and then the form would have been sent along to Carlisle with the group of students. These forms were then forwarded along to Office of the Commissioner of Indian Affairs. These records provide additional information about name variations, home addresses, health upon arrival, and other factors.

These records are today held by the National Archives in Record Group 75, Entry 91: Letters Received by the Bureau of Indian Affairs, 1881-1907. The files were digitized in 2017 and 2018 by Dickinson College students and staff. More Descriptive Statements will be posted as they are processed. 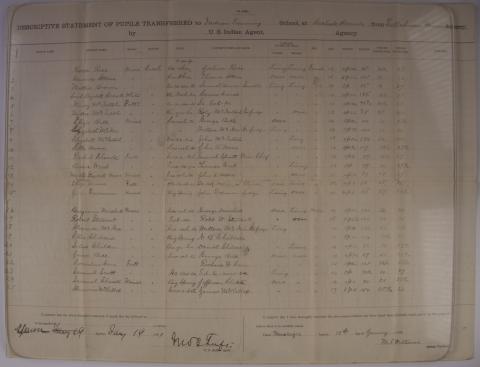