Suggestion to Build an Indian School in Nebraska

Mattie G. Reynolds writes to Richard Henry Pratt asking for a position at the Carlisle Indian School in sewing or as a sewing teacher or assistant matron. Reynolds, who formerly worked with the Pawnees in a variety of roles, additionally describes a large building that was formerly used as a manual labor school for the Pawnees. Reynolds believes it could be converted to an Indian school. Pratt forwards Reynolds' letter to the Commissioner and relays a suggestion from Marianna Burgess, a teacher at Carlisle familiar with the building Reynold describes, that $500 would be enough to repair and convert the building. Burgess believes it could accommodate 80 students and would make a great boys or girls school for Indians in Nebraska. 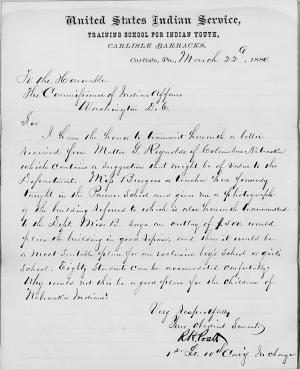