Response to Sending Delegation of Students from the Lemhi Agency

Richard Henry Pratt responds to a letter from John Harris, the U.S. Indian Agent for the Lemhi Agency, in regards to sending a delegation of students from the Agency to the Carlisle Indian School. Pratt also comments on the current number of students currently enrolled at Carlisle and the ability of the school to take additional pupils. Pratt notes that while he would be willing to take a small delegation from the Lemhi Agency with certain conditions he recommends sending them to the Forest Grove Indian School. 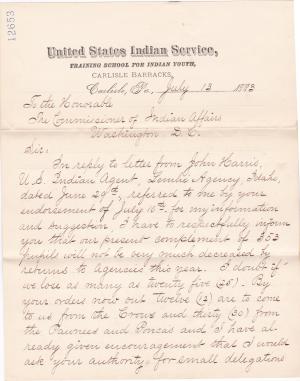