Request for Instructions Regarding Donations

Richard Henry Pratt writes to Commissioner of Indian Affairs Ezra Hayt for instructions on how to process donations received for the Carlisle Indian School. Pratt notes that he received a donation for the continued education of a former prisoner-of-war held at Fort Marion in St. Augustine, Florida. He requests specific instructions on how or whether these and other donated funds should be deposited in the government's Civilization Fund. 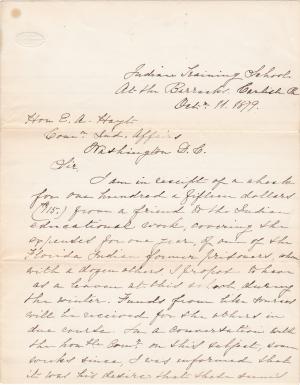