Richard Henry Pratt responds to a request from John Wilson for the return of his grandchildren Samuel Wilson and Minnie Finley. Pratt notes that Samuel has just went out on outing and should remain there in order to honor his contract. In addition, Pratt plans on taking any student willing to pay for the trip to Chicago to see the World's Fair and Columbian Exposition. After that time he is willing to return the students to their home. 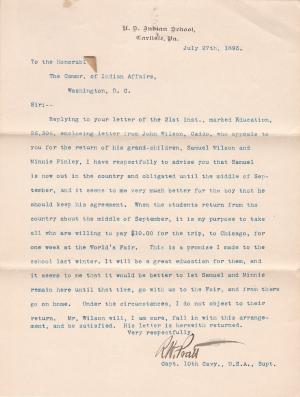