Richard Henry Pratt responds to a request from J. C. Williamson regarding his son who had run away from his outing home on August 3, 1892. Pratt provides some background on Curtis and the fact that he had expressed no discontent towards his outing experience. He further indicates that he is directing his outing agent to visit New York City to look for Curtis and that he will likely turn up somewhere. In addition, he encloses a letter from the outing patron indicating that Curtis had run away. 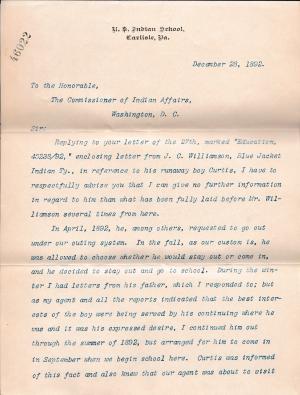