Richard Henry Pratt encloses a copy of a letter from B. F. Beveridge to Charles Tackett about how to ensure that the Indian chiefs while visiting Washington D.C. stay at the Washington House (Beveridge's establishment). In his cover letter, Pratt informs the Commissioner that he intends to discharge Charles Tackett but thinks it should be done quiety due to his tendency towards "mischief." 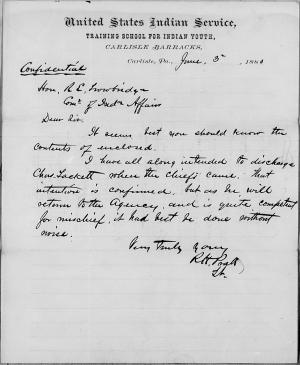