Inquiry About Participating in Inaugural Ceremonies

Richard Henry Pratt requests permission from the Commissioner of Indian Affairs for approval to have 200 boys and the Carlisle Indian School band to participate in the inaugural ceremonies. Pratt notes that Secretary of the Interior Henry Morgan Teller believed the idea to be a good one and it would be without expense to the Government. 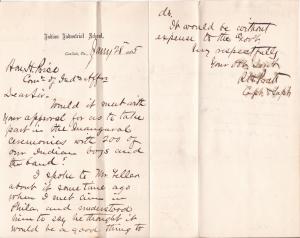