Harvey Townsend Requests to be Transferred to Carlisle

Richard Henry Pratt forwards a letter from a former student Harvey Townsend asking to be transferred from the Albuquerque School to the Carlisle Indian School. Pratt notes that when Townsend left Carlisle he indicated he would return but ended up at Albuquerque. Pratt asks that Townsend's request to be transferred be granted. 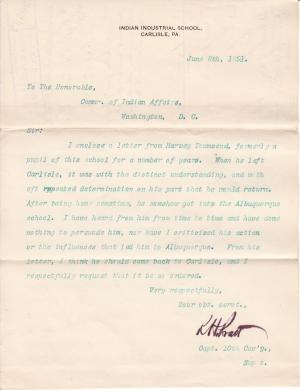