Daniel Dorchester, Superintendent of the Indian Schools, comments on his investigation regarding a letter written by Adela Rankin to Theodore Roosevelt about student abuse, as well as complaints of New York Indians regarding a lack of food at Carlisle. Dorchester relates that he has tried to follow up with Rankin but has not gotten a response to his letter. He relates that the complaints regarding the food were the result of a poor cook who has since been replaced. Transcript included. 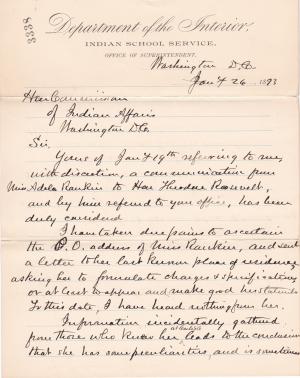