Supervisor in Charge of the Carlisle Indian School Oscar H. Lipps encloses correspondence involving the school, the Bureau of Indian Affairs, and the Gettysburg & Harrisburg Railway Company to the Commissioner of Indian Affairs. Second Assistant Commissioner C. F. Hauke then forwards the enclosed correspondence, which revolves around the railroad complaining about an unpaid claim, to Philip J. Kelly, the auditor of the railroad company. Hauke tells Kelly that Carlisle and the Buruea do not need to pay the claim because it is actually Alling & Cory Co. that owes the railroad money. 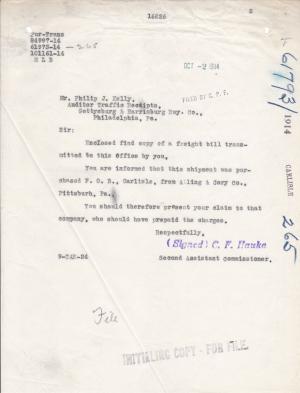