Correspondence Regarding Allegations towards the Outing System

Correspondence from Daniel Dorchester and Richard Henry Pratt to the Office of Indian Affairs regarding allegations from Pratt that Dorchester was set to attack the Carlisle outing system on the grounds that 13 students had become pregnant. Pratt calls the allegation false and that only one such case has occurred during the early part of the outing system when students were grouped together. Dorchester goes on to deny the claim and calls for transparency on Pratt's claims. 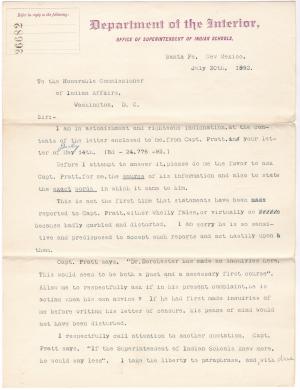