Application for Employment from Eva Rogers

Richard H. Pratt recommends that former student Eva Rogers be appointed as the assistant matron in the Indian Service. Pratt forwards Rogers' application to the Commissioner of Indian Affairs and endorses her in his cover letter.  Also, Pratt advises the Commissioner that Rogers did not graduate from Carlisle but will receive her diploma because of her work outside the school and education at Perkiomen Seminary in Pennsburg, PA. 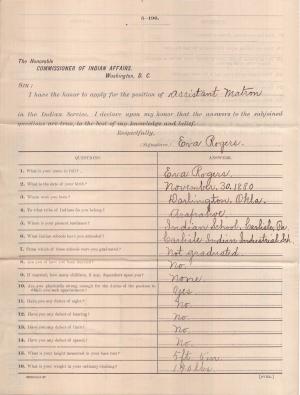