The 27 photographs in the Speck-Choate Photograph Collection were taken by J. N. Choate, a local commercial photographer in Carlisle, Pa., and collected by the anthropologist Frank G. Speck. Choate advertised "Photographs of all the Indian Chiefs that have visited the Indian Training School at Carlisle Barracks, also of children in native and school costumes" and were intended to document the benefits of civilization that the school brought to Indians. Typical images include "before and after" shots of students in native dress and school uniforms, the school band, and shots of the students at work in the saddle shop and making shoes. Choate also took a number of images of visiting chiefs in traditional dress, including the Lakota chief Spotted Tail, and the Cheyennes Man on Cloud and Mad Wolf. One photograph depicts Richard Henry Pratt seated with Quaker supporters. Among the tribes represented are the Lakota, Laguna, Cheyenne, Creek, Lipan, and Pueblo. 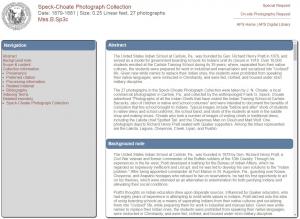