This sketchbook was made by Koba (Kiowa), a member of the group of 72 prisoners that Richard Henry Pratt educated at Fort Marion in Saint Augustine, Florida in the late 1870s. Koba later became a student at the Carlisle Indian School. This sketchbook includes multiple sketches related to education and captivity at Fort Marion. 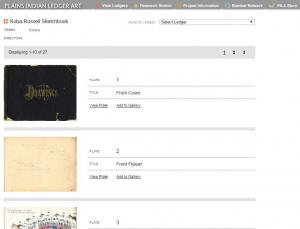