Student file of Wesley Wolf Plume, a member of the Piegan Nation, who entered the school on February 1, 1907 and departed on May 27, 1907. The file contains a student information card, an application for enrollment, a returned student survey, former student response postcards, and a report after leaving indicating that in 1910 Wolf Plume was a rancher in Browning, Montana. 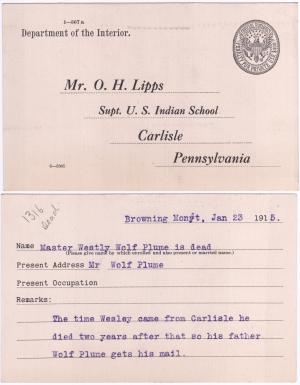