Student file of Patrick O'Neal, a member of the Shoshone Nation, who entered the school on June 25, 1904, and departed on June 23, 1909. The file contains a student information card, an application for enrollment, correspondence regarding O'Neal leaving an outing, a progress/conduct card, an outing record, a report after leaving that indicates O'Neal was a student at the Chilocco Indian Agricultural School in Chilocco, Oklahoma in 1911. 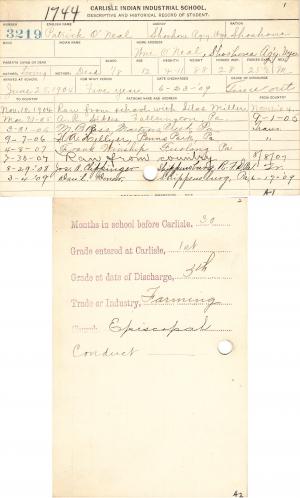