Student file of Oscar Warden, a member of the Sioux Nation, who entered the school on November 7, 1892 and departed on January 3, 1894. The file contains correspondences, a returned student survey and a report after leaving indicating he was a school disciplinarian in Rosebud, South Dakota in 1911.

Note: The information on the student's Nation comes from a ledger in NARA_RG 75_Series 1324_volume 1. 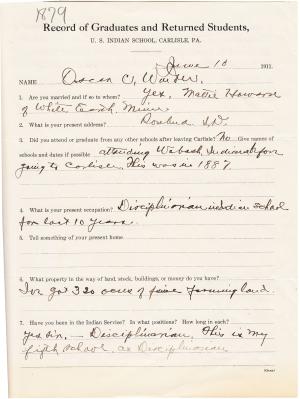