Student file of John B. Flinchum, a member of the Choctaw Nation, who entered the school on September 4, 1915, graduated in 1917, and ultimately departed on January 14, 1918. The student did not attend the school continuously, but left and reentered. The file contains student information cards, an application for enrollment, an outing record, financial transactions, correspondence, and certificates of promotion. The files indicate that Flinchum was a member of the graduating class of 1917, and studied painting. After leaving Carlisle Flinchum was living in Gerty, Oklahoma. 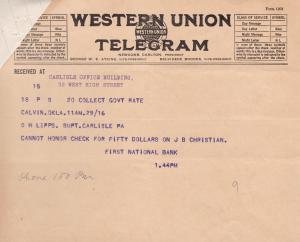