Student file of David Henry Robinson, a member of the Klamath Nation, who entered the school on September 17, 1905 and departed on June 22, 1910. The file contains a student information card, an application for enrollment, a news clipping, correspondence, returned student surveys, a progress/conduct card, an outing record, a trade/position record card, and a report after leaving indicating that Robinson was working as U.S. mail carrier in Sawyer's Bar, California in 1912.

Note: At the time of scanning at the U. S. National Archives, a document in this student file seemed to relate to a different student, Dan Robinson. That document has now been included with the Dan Robinson file: NARA_RG 75_Series 1327_box 43_folder 2099. 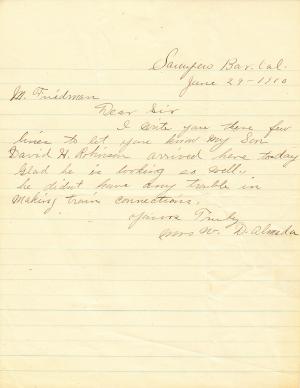