Student file of Christie Jackson (Kerisite), a member of the Mohawk Nation, who entered the school on August 10, 1901, and departed on June 24, 1906. The file contains a student information card, and a report after leaving indicating Jackson was living in Hogansburg, New York, in 1910.

Note: At the time of scanning at the U. S. National Archives, a document in this student file seemed to relate to a different student, Justina Jackson. That document has now been included with the Justina Jackson file: NARA_RG 75_Series 1327_box 42_folder 2083. 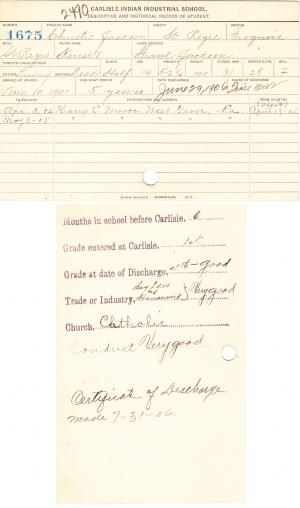