Student file of Abram Smith, a member of the Oneida Nation, who entered the school on January 21, 1899, graduated in 1904, and departed on July 26, 1904. The file contains a student information card, a former student response postcard, a returned student survey, and a report after leaving indicating that in 1911 Smith owned his own general store in Seymour, Wisconsin.

Note: In this file the student is referred to as Abram Smith and Abraham Smith. 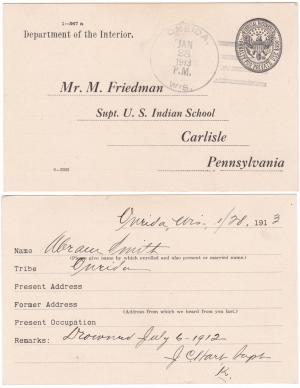