Student file of Joseph Washington, a member of the Eastern Band of Cherokee, who entered the school on April 5, 1898 and departed on June 22, 1904. The file contains a student information card, correspondence, a former student response postcard, a returned student survey, and a report after leaving. The file indicates Washington was a soldier in the U.S. Army, a police officer at the Cherokee Indian School in Cherokee, North Carolina in 1911 and a disciplinarian in Cherokee, North Carolina in 1915. 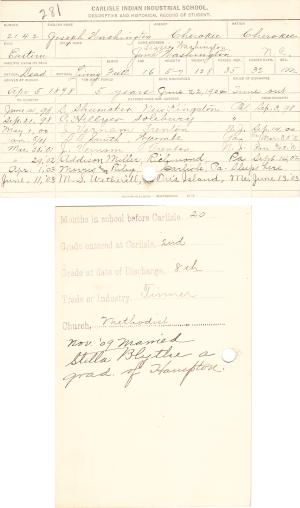