Richard Henry Pratt writes to Acting Commissioner of Indian Affairs E. M. Marble regarding three former Florida prisoners that should be returned home, escorted by Agent Miles. The first is going to die soon because of an accident suffered while playing baseball, and his chiefs want him to die at home. The second is the son of the late Cheyenne chief, Lean Bear, and should return home to help support his mother, and Miles has already offered him a job there. The third is Kiowa and should return home for a brief period of time to recover from an ailment, but he will likely return East to finish his training as a tinner. 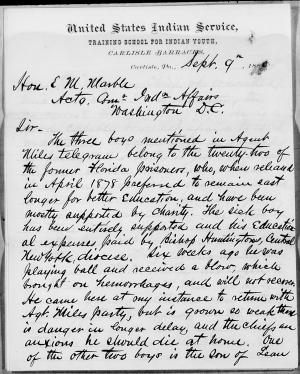