Pratt Responds to Department Plan for Chicago Exhibit in 1893

Richard Henry Pratt expresses his disappointment in the plan of the Office of Indian Affairs on its upcoming exhibit at the Chicago World's Fair and Columbian Exposition. Pratt notes that the proposed plan does not offer an opportunity to demonstrate individual schools and the larger Indian School system a respectable showing. Rather he recommends placing a permanent general exhibit rather than rotating students from various schools every ten days. 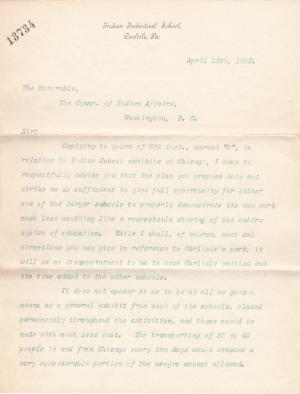