Richard Henry Pratt provides further discussion related to his telegraph objecting to U.S. Indian Agent Wilcox spending his appropriation money in transporting students from the Apache Nation to Carlisle. Pratt indicates that he had negotiated with the General Passenger and Ticket Agent to spend the same amount on transportation as he does for students from the Dakotas and Indian Territory. He was recently contacted by the Ticket Agent that he needed to accept the rate at once and he has since been led to believe that the U.S. Indian Agent has been told to negotiate the ticket price using Pratt's transportation appropriation against the desires of the Secretary of the Interior. 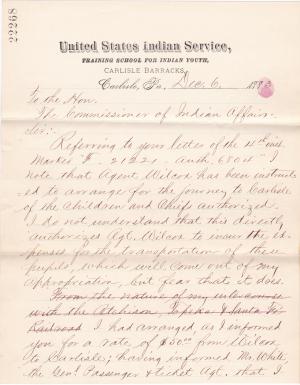