Application for Employment from Elizabeth Williams

Richard H. Pratt recommends that former student Elizabeth Williams be appointed as an assistant teacher or assistant matron in the Indian Service. Pratt forwards Williams's application to the Commissioner of Indian Affairs and endorses her in his cover letter.

Note: There were two students named Elizabeth Williams who were at the school at the same time. Since this person identifies as Chippewa, she is not the Elizabeth (also known as Lizzie) Williams who left but apparently did not graduate in 1903 and was from the Tuscarora nation. 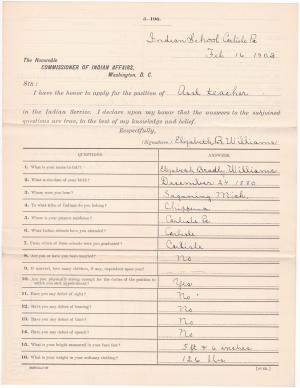