This sketchbook was made by Zotom (Kiowa), a member of the group of 72 prisoners overseen by Richard Henry Pratt at Fort Marion in Saint Augustine, Florida in the late 1870s. Zotom later became a student at the Carlisle Indian School. This sketchbook includes multiple sketches related to education and captivity at Fort Marion.

This sketchbook is held by the Taylor Museum at the Colorado Springs Fine Arts Center, and was digitized by the Plains Indian Ledger Art project of the University of California at San Diego. 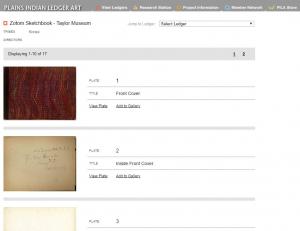